Energisa Group, which traces its origins to Companhia Força e Luz Cataguases-Leopoldina (CFLCL), the Group‘s former holding company, is active across the electric power distribution, generation, services and trading businesses, but with distribution as its core business. Get to know a bit about the history of the Group in its timeline.

Cataguazes-Leopoldina is the third joint-stock company to be registered on the Rio de Janeiro Stock Market.

The company inaugurates its first hydroelectric unit, the Mauricio Plant, with 800 kW of power, one of the pioneering generators of the country.

Payment of the first dividends.

Expansion of the Maurício Plant to 1.2 MW.

Cataguazes-Leopoldina becomes one of the first companies in the world to allow profit-sharing for its employees.

Construction of the Ituerê Plant, with 4 MW, in the municipality of Rio Pomba, MG.

The first turbine of the New Maurício Plant goes into operation, with 5 MW.

The second turbine of the New Maurício Plant goes into operation, also with 5 MW.

The third turbine of the New Maurício Plant goes into operation, with 11.2 MW. Acquisition of a Diesel Group for thermal generation, with 5.5 MW, in Cataguases. Change of frequency of the distribution from 50 to 60 Hz.

Interconnection with Furnas, via Light, in Além Paraíba.

Inauguration of the Glória Plant, with 13 MW, in Muriaé.

The company is awarded a concession for the Municipality of Sumidouro, Rio de Janeiro and repowers the Neblina plant in Ipanema, Minas Gerais.

Cat-Leo Energia S/A, an electric energy generation and service providing company, is founded with headquarters in Cataguases. Acquisition of Companhia Energética da Borborema (CELB), with headquarters in Campina Grande, PB. Start of operation of the PCH Ervália plant, with 9.6 MW, in the municipality of Ervália, MG.

Cataguazes-Leopoldina wins an Abradee Award as best company in the Southeast while Energipe is named best company in the Northeast. The company undertakes another major venture, simultaneously initiating five new small hydro developments in the Atlantic Forest belt of Minas Gerais known as Zona da Mata.

Cataguazes-Leopoldina Group becomes Energisa Group and begins operating under the new brand, with shareholders approving new names for Group companies. All company names are now prefixed by Energisa followed by words denoting their place of business or activity, reflecting their unification under the new Energisa brand, as follows:

Energisa S/A acquires full ownership of all shares in subsidiaries and broadens its generation development portfolio with the construction of three new small hydro plants – Caju, São Sebastião do Alto and Santo Antônio – with an aggregate capacity of 31 MW.

Energisa enters into generation of electric energy from the source of wind. The company will build five windpower parks in Rio Grande do Norte, with investments that will total R$ 560 million.

The Caju (10MW) and São Sebastião do Alto (13.2 MW) small hydro plants begin commercial operation and work begins on the 8 MW Zé Tunin small hydro development. In December 2011, Energisa acquires two thermal power plants from Tonon in Bocaina (São Paulo) and Maracaju (Mato Grosso dos Sul), with a total capacity of 60 MW. In November, the company acquires the Cristina small hydro plant on the Lambari River, in the municipality of Cristina, Minas Gerais, with an installed capacity of 3.8 MW.

The 8 MW Zé Tunin small hydro plant is put into commercial operation in March 2013 and Energisa Geração begins simultaneous development of five wind farms in Rio Grande do Norte (Renascença I, II, III, IV and Ventos de São Miguel), collectively forming a wind park comprising 75 wind turbines with an installed capacity of 150 MW and an output of more than 700 GWh per year, enough to supply renewable energy to 1.4 million people. 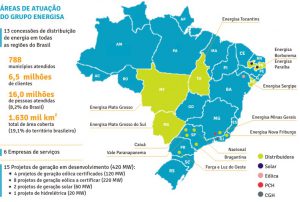 The transfer of Grupo Rede’s shareholding control to Energisa was completed on 11th April. With this acquisition, Energisa will now provide services to approximately six million consumers, or a population of 15 million people in 788 municipalities in nine States, covering all regions of the country.

Commemoration of 110 years of Energisa Group and one year since the new companies were integrated into the group. The painstaking task has now been completed of inserting these companies into the Energisa Scenario and brand. The company also created a new tagline in the year: “Energisa, Connected to your energy”.

On July 28 the Company confirmed it had signed up to BM&FBOVESPA Level 2 Governance and would begin trading its shares in this special segment. This places Energisa amongst companies listed on the stock exchange that follow the best market transparency and governance practices. 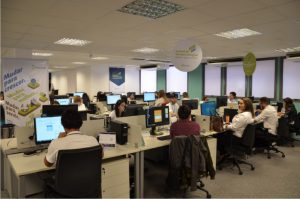 On April 03, the Energisa Services Center (CSE) came into operation in Cataguases (MG). This center centralizes the provision of transactional services and recurrent operating activities of administrative departments, like payroll, vacations and issuing invoices. In addition to enhancing the organization of the company’s work routines and processes, this change has boosted departmental performance and generated better results with lower costs, bringing more security and robustness to the Group.

Commemorating 113 years in business on February 26, 2018, Energisa Minas Gerais, the founding company of Energisa Group, has opened its new head offices.
Energisa secured another lot (number 19) in Pará state at Transmission Auction 002/2018 held June 28, 2018. This project is the continuation of Lot 26 of Auction 005/2016, which Energisa secured in April 2017, and which will result in important constructive, operational and maintenance synergies. As a result of this new acquisition Energisa now holds three transmission projects, with a length of 571 km. 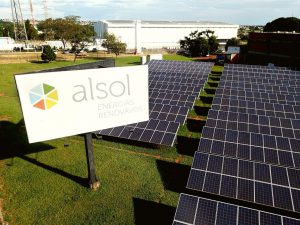 On 5/2/2019 Energisa invested R$ 11.7 million to acquire 87% of the capital of Alsol Energias Renováveis S.A, a company of Algar Empreendimentos, which is the leading photovoltaic energy firm in Brazil.

Founded in Uberlândia, Minas Gerais state, Alsol is a Brazilian company that offers a portfolio of generation solutions primarily based on photovoltaic solar solutions and other renewable solutions such as biogas, biomass, wind power and hydroelectricity. The company is also one of the pioneers in Brazil in lithium-battery storage. Alsol had installed upwards of 80 thousand photovoltaic panels in Brazil by 2018, resulting in more than 25 MWp, and operates in 12 Brazilian states. In January 2021, Grupo Energisa launched the first electric sector fintech to Voltz Capital SA Voltz is a startup of the Energisa Group, which for more than 116 years has supplied electricity to millions of Brazilians and now brings more energy to its projects through a free and complete digital account, capable of replacing the main banking and financial services offered by traditional banks.